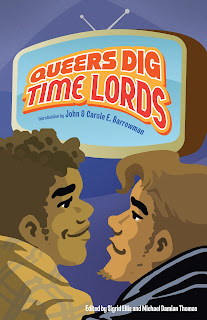 Edited by: Sigrid Ellis and Michael Damian Thomas
With an introduction by: John & Carole E. Barrowman.


Queers Dig Time Lords is the latest anthology of essays from the brains behind the Hugo award-winning Chicks Dig Time Lords and should be another winner. Focusing on the different viewpoints, reactions and personal histories of (mostly LGBTQ) people who have been affected and inspired by Doctor Who, it tells us how to be better people and, essentially, love who we are for what we are.

There are some brilliantly funny titles ranging from Gary Russell’s PVC Made Me Gay to Mary Anne Mohanraj & Jed Hartman’s Seven Ways Of Looking At Captain Jack although the reliance on Captain Jack in the book are far too heavy, with multiple chapters devoted to him. I understand he’s a major character but he stole the limelight from some of the other issues. You need look no further than the strong essays by Racheline Maltese and Martin Warren to discover everything you ever needed to know about how culturally important he is.

The beginning of the book is a bit weaker with too many footnotes, one even being a mere link to wikipedia to tell us who Beau Brummell is, which started feeling like a chatty essay with a Daleks Master Plan-sized pile of afterthoughts. Some of the chapters go a little too far for my tastes as well, such as imagining River with a whip, although maybe some people like that?

There are almost thirty essays here and far too many to mention in one review but there’s also so many I’m impressed by. Naamen Gobert Tilahun should be forced to write a piece defending every single underappreciated character in the history of Doctor Who whilst Hal Duncan disastrously gains our hate by calling the Daleks ‘Pepperpots’ before going on to tell his story in the brilliant yet somehow not obvious form of starting at the end and raises some brilliant comparisons between the Doctor and the Prisoner (although to stop fans committing suicide he should NEVER be put in charge of the show)!

Meanwhile I’ll never look at The Stones Of Blood again without spotting all the smart lesbianism thanks to Julia Rios and Cody Quinjano-Schell even watches those disliked stories like The Mutants and Delta And The Bannermen to find LGBTQ issues to raise, even going so far as spotting something in The Pirate Planet, he just keeps on adding layers to these stories that add to GayWho!

The above are just a few of the essays I’ve touched on which are written by some insanely clever and talented writers and that’s before I’ve even got to the always-brilliant former DWM-editor Gary Russell (and his love for Peter Vaughn-Clarke) who, scarily for him, looks at the world in the same way I do!

But the real show-stealer of this book comes surprisingly early on with Emily Asher-Perrin’s beautiful and tearful Time, Space, Love. This is the best personal journey of the programme I’ve ever read and it’s brilliant. I’m jealous of the life her and her girlfriend led, relating to Rose and Tennant’s Doctor in a way nobody else can. It strikes up images of a life led to the full, where you can have the happiest of times. It’s heart-warming and heartbreaking and just beautifully told. The book is worth buying just for these ten pages.

Like Asher-Perrins, the essays which are written about the author’s personal live are the most inviting and relatable to read, however the show is also put in it’s historical and factual context which really leaves an impact and hits home how lucky we are and how far and open sexuality has moved on, both in Doctor Who and the wider world.

Ultimately this isn't a book about Doctor who, it's a book about people who are different who strive to be the person they want to become, to become free within themselves. It just so happens they've all been touched by one programme which has given them the power to embrace who they really are and THAT is why Queers Dig Time Lords.

Oh and there’s also a list of the sexiest men in Doctor Who (and yes, it does feature Michael Craze)! If that isn’t reason enough to buy this book I don’t know what is…

Matt Holsman
An ex-student of Scriptwriting awaiting graduation, I am now pretending to be a Writer.